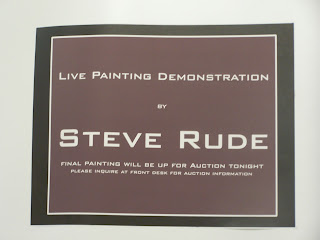 Well, my latest trip contained the best and worst of everything.  I speak of course, of my recent excursion to Pasadena where they all came to see the Dude do a live painting demonstration during the opening exhibit at the Linus fine-art gallery.
With Gino at the steering wheel, we left early on Friday morning as we made the 7 hr. drive from Phoenix to CA to prepare for my demo that night.  We checked in to our hotel, reviewed the sights of some old familiar stomping grounds, said hello to Max the dik, and arrived at the already-hopping gallery by 6:00 p.m.
As the Dude took center stage before the easel, his palette of paints, and before the gorgeous model reclining on a burgundy ahrmwa, I took a few celebritory sips of champagne and shrimp as the crowd breathlessly awaited my next move.  Online announcements had circulated to all the proper venues, as well as to the other exceptional artist's who's work was on display that night, so anticipation was high.  Everyone was curious to see a real artist paint a masterpiece before their very eyes, and I certainly wasn't there to let them down.  Nervous?  Nah. 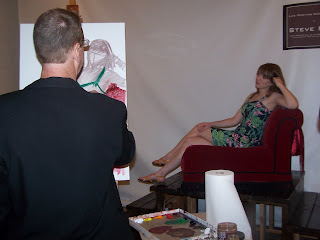 As I applied the first strokes of paint on canvas, they watched the Main Man, dressed not in his usual attire of artist's smock and paint-stained clothes, but in my finest suit, dress shirt, slacks, and shiny black wing tips, as they all watched me produce...an absolute failure.
Yes, friends.  Gone were the trumpets of triumph when I completed the final strokes that would've netted me the glowing reviews and cover of American Artist, while driving home with buckets of cash hanging from every oversized pocket.  No.
Not only did the painting stink, but it gathered not a single bid from the Gucci-attired high-society masses who are there to purchase such things.  Yes, friends, despite the accolades from other friends, and attending artists on my "success"--for at least having been brave enough to attempt such thing--the Dude himself, went home in shame, never to carve the roast beast.
Thankfully, tomorrow was another day. 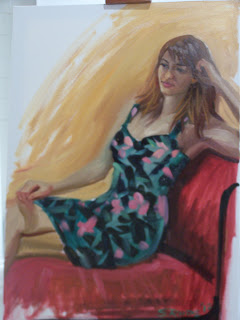 Upon arriving home, I took a wealth of notes on my abysmal failure and how to improve upon it for next time.  With a couple sweeps of my turpentine stained cloth, I swiftly obliterated the entire offending image from the previous night, and set about to make a new attempt of preserving what might still be left of my former reputation.
Armed with the experience of just having painted directly from the model, and standing by with the several handy reference photo' having been taken earlier for just such a contingency, I will once again, try again.
HOW WILL IT TURN OUT?
As always, stay tuned.
Still stinging from the agony of defeat,
The humble Dude
Back to blog
★ Judge.me Reviews