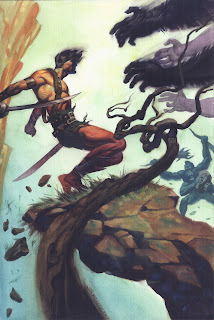 On our last exciting installment of Dude's Daily Diatribe I reported that I had contacted DC to offer my services as artist. I also promised an update is that situation changed in any way. Well, the latest is...nothing's changed! DC has never formally responded to my offer, and, I suspect, with little expectations of any to come.
As I was informed by friends who monitor such things, it so happens that just after I had sent my letter to DC's top people, I received word that the company had plans to relaunch their books with new #1 issues for their entire pantheon of characters. I don't know if this had anything to do with my not hearing back from them, but it would seem logical to assume a connection of some sort. The timing of it all seems more than a bit serendipitous.
Meanwhile, the latest in the commission front is the piece I just finished of--John Carter of Mars. I can almost hear the Red Planet trumpets sounding off with that pronouncement. After all, I've never exactly had much visual association with any Burroughs characters, and since I've never read the books, I thought the challenge would be a worthy one. I received some paperback book cover reference as an aid, natch, and of course, I'd seen the green, four-armed guys and mohawked gorillas that Frazetta did for this cast. Any resemblance of the Dude piece and the work of F.F. is purely and deliberately--on purpose.
The mega editions of the Artist in Motion books are being ordered from all corners of this earth--so that's keeping me and Princess pretty content for now. And keep up the facebook comments and e-mails inquiries--they are read by the entire Dude household, the Sillies and two diks included!
Till my next installment,
I remain, from my new back-supporting chair vantage point,
The Dude / Mr. Humility
Back to blog
★ Judge.me Reviews