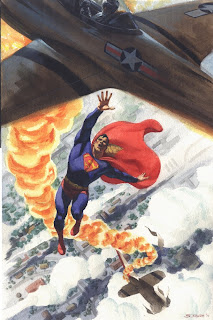 THE DUDE'S RETURN TO COMICS??
Read on..!


Devotee's of the Dude Daily Diatribes may find this of interest:


This decision took place no less than a month ago, after I came to the following realization--


One-- I've had enough time away from the field to want to come back.  In the time that I've been gone, comics seem to have only gotten worse in terms of art and story, which is what made me back off in the first place.   I feel that any direct contributions I could make by re-entering the field might have a positive effect.


Two--I needed the bread.  Commissions and other jobs are fine, but actually being an active member of the comics field seemed more prudent.  After talking it over with Gino, we decided it would be best to write the company I'd most like to do business with, and then see what transpired.  And who would that company be?


That company would be DC comics.


The books I would most like to contribute to?  Here they are in order of preference:

3.  BIG BARDA and her FEMALE FURIES

One month ago, I began my contact with DC through an editor that I knew.  Having no success, I tried a second editor.  Then finally, one of the higher-up "exec" types.

So far, one editor has responded--with a turn down.  The two others I never heard back from.
Interesting world, isn't it?

If any changes take place over the next few weeks, I'll fill you in with an update.

In the meantime, keep ordering those commissions!  I have tried and failed to do "simple" watercolors for so I regret I must raise the price to starting June 1st.  These were supposed to be "quick" 11x14 watercolors and instead have been finished 15x20 paintings.
In the spirit of all great creators who've shown me the way,

The humble Dude
Back to blog
★ Judge.me Reviews