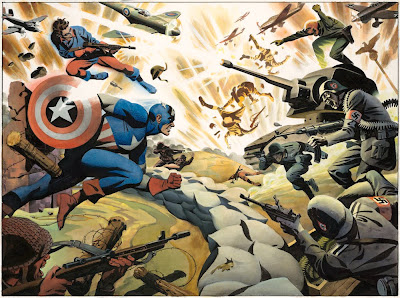 Stage one has always been inspiring to me, and I might be able to add a few things to this piece to justify doing it. Going into it, however, I had only the vaguest glimpse of procedural foresight to see how I might pull this off. And that's what your roughs are for... What the hell do I know about WW2? Besides next to nothing? Some guys really get off on this historical stuff. My dad, for one. But I'm not my dad. Kirby's great creation ,Stage One involved--I believe its called.

If I thought if I could get away with merely copying the original drawing line for line, well, I knew that was out. The soldiers, planes, artillery, poses of Cap and Bucky, and the multitude of extras would all have to be modified to appease the image in my head. I knew the research was going to be heavy--no getting around that. A few trips to the library, and few polite urgings with Gino to look online, and I had my basic materials that I would be needing. And need them I would.

The drawing came first, on some nice lifetime-enduring 2' x 3' watercolor board. Once I roughed in the drawing, I shrunk the whole thing down on my xerox machine, and did a few value roughs over these miniature copies.

In the late 50's. Dorne worked in transparent, colored permanent inks, which he applied over a value painting done first done in b & w washes. Alex Ross has made a career from working in this method, as well. I myself was a bit rusty with this technique, but it eventually came back to me as I toiled on. Halfway through the inking stage, I got the idea to ink in only the shadow areas and not put in the outlines all around the figures. Not sure why. But instead of then going right to color, again using the golden-age version as my guide, I decided to render everything first in a b & w ink wash, a procedure which I learned from artist Albert Dorne, the man who put together the Famous Artists School.

When I finally got to the color stage, I hauled out the colored inks and went to work, almost completely ignoring the original color scheme from the golden age reference. My own sensibilities seemed to take over at that point.

Once the color was applied, it was done. Was it easy? Hell, no! It was immensely taxing, and looking back, I should've charged twice what I asked for it, but this is the way things go as a commercial artist. Once you've agreed on a price, you apply yourself to the same standards whether they paid you 5 bucks or 5 million.

Hope everyone likes this special Dude recreation of the golden age

I look forward to your comments. 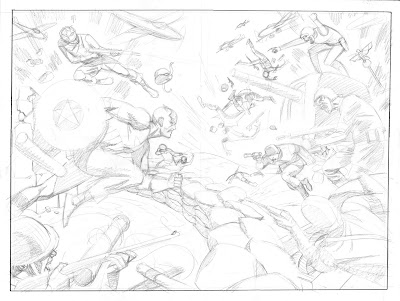 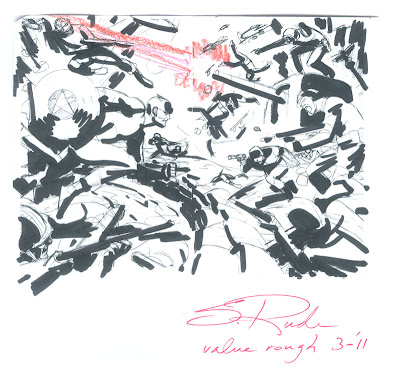 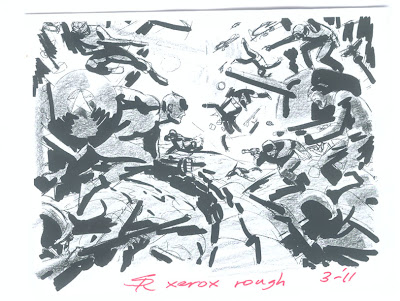